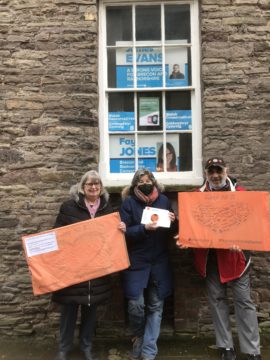 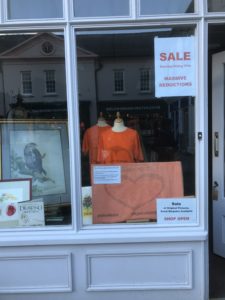 Monday February 14th marked the last day of the very successful Art exhibition hosted in
the old Oxfam Shop in Bethel Square by Hay Brecon and Talgarth Sanctuary for
Refugees [HBTSR]. The shop was loaned to Brecon Rotary Club by Skyscape Property
Management and has been used for a number of beneficial community purposes. The
Rotary Club were happy to allow HBTSR to borrow the shop and also to provide practical
help as the Rotary has a long history of providing support to displaced people around the
world.
HBTSR are very grateful to the Rotary, the many local artists who so generously donated
their work, to the shop volunteers, to our neighbours Tenovus and The Works for their
support and to the public who have attended and bought cards, books and artworks.

HBTSR secretary Ailsa Dunn commented that ‘Having the shop has allowed us to raise much needed money but also to have interesting discussions with many people. We have been drawing attention to the Nationality and Borders Bill which is currently in the House of
Lords before returning for its final reading to the Commons in March. We were delighted to discover that most of the many hundreds of people who came to visit the shop shared our concerns about this Bill. The Bill sometimes called the ‘Anti Refugee Bill’ has met
considerable opposition in the House of Lords where many amendments have been suggested.’ 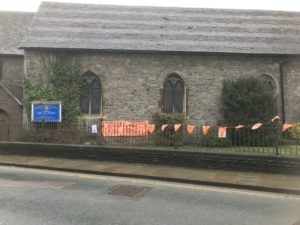 Banner and Bunting on St Mary’s Church in Brecon on the 14th and gathering outside the shop before visiting the Conservative offices to present the petition, cards and pillow cases. 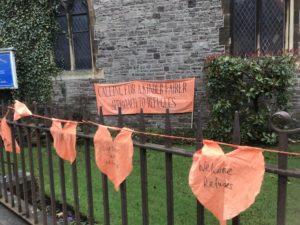 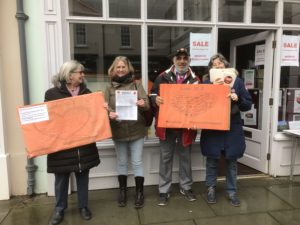 On 14th February ,HBTSR presented a number of Valentine cards and 2 heart painted, signed pillow cases and a petition with 170 signatures [ we had already taken one with 200 signatures in the autumn]  to Fay Jones’ Office in Brecon outlining their hope that she might consider supporting two key two key cross-party House of Lords amendments to the Nationality and Borders Bill.

● The removal of Clause 11 which would permit the Home Office to treat refugees differently based on how they arrived here;

and
● The introduction of a new and safe route by setting an ambitious but deliverable target to resettle 10,000 of the world’s most vulnerable refugees a year.’
An orange heart is the symbol adopted by the Together with Refugees Coalition which is campaigning for a more compassionate, kinder and fairer approach to people seeking refuge and this was why HBTSR chose to mark St Valentines day with cards to Fay Jones. 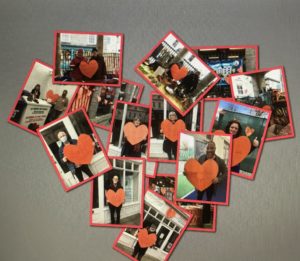 a collage of people holding the orange heart

one of the pillow cases designed by Adil and signed by many visitors to the shop and stall. 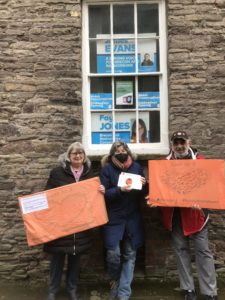 Chair of HBTSR Margaret Blake said ‘ We were all moved by a 6 year old boy who having asked his mother to bring him to the shop wrote a message on one of the Valentine cards in Welsh. ‘ Os Gwelwch yn dda, Helpwch pawb yn y byd. Diolch Fay’ [Please help people in the world. Thanks Fay]    We hope that Fay may listen.’ 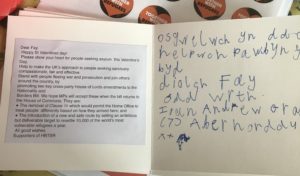