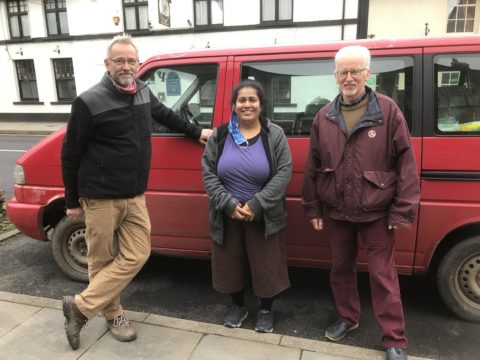 A blog about aid for Ukraine

‘Can I help  you with transport’, said the man with a van. Now I don’t usually talk about Divine providence but when a man just happens to  offer a van  and driver in a church that has many generous donations for people seeking refuge from war, then that really feels like some benevolent being is helping! Jasper has been a supporter for years although  we’d never met previously  but  we’d often benefited from his donations of goods in the past  . Here he was in St Mary’s Church in Brecon offering to help sort donations and to take them to Neath! Truly amazing. 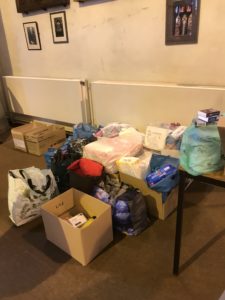 Just to recap, Russia invaded Ukraine on 24th February  2022 causing many people to flee to neighbouring countries creating an immediate humanitarian crisis on the borders. On 26th February HBTSR resolved that we must do something practical and noted  our friends in Swansea Humanitarian Aid Response Project [ SHARP] suggestion  that people support an appeal launched by the NMCC Church in Neath to send aid to the Polish Ukrainian border. The church  has a member with links  with the Polish Red Cross and  they requested :-

Gail at Borderer’s Guest house, herself  a serial philanthropist, asked if there was something she could do other than just worry and feel useless. She agreed to check out the NMCC church and to take a small load to them. It was a relief to learn that the Pastor at the church had contingency plans to involve additional transport if needed [ and we suspected that it would be needed ]  and was aware about the customs forms. She rushed out on Monday and cleared shelves in Aldi!  She offered her premises as a sorting point and she and Rowland were going to take a trip to Neath on Tuesday.
HBTSR posted on Facebook that we were linking to NMCC and sent an email on Monday to all supporters about a very focused collection and giving other options to do something including the information that

The Red Cross, UNICEF, UNHCR and International Rescue Committee all have appeals. and a link giving other ideas for help

St Mary’s Church in Brecon and in Hay had both agreed to be drop off points and many local schools were very keen to join in. At the time of writing, Gwernyfed and Brecon High schools, Hay, Clyro, Cradoc and Llangorse primary schools are involved.
Dixies Corner in Brecon are also sending items to the Polish/Ukrainian border and have like us been amazed by the generosity of people who all want to do something to help in this terrible situation. It seems that so many people want to do something practical to help cope with the feeling of powerlessness that the war is causing. Sending money just doesn’t quite cut it.
By Tuesday morning, it was obvious that Gail’s car was not large enough to fit the first tranche of goods  and two hours after the church had been emptied there was a even larger  collection of items to  replace them! Jasper and Gail drove to Neath,  were welcomed and stunned by the volume of goods already  there. 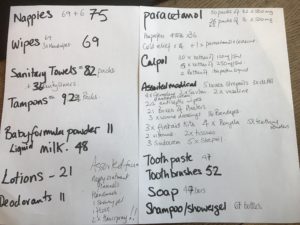 an inventory of items sent on Tuesday 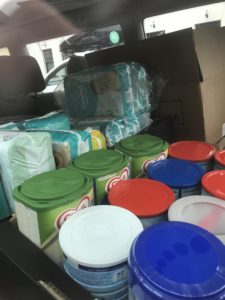 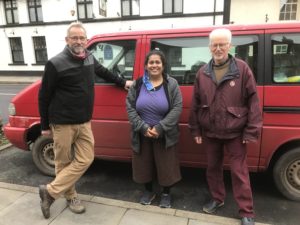 Gail, Jasper and Rowland with the miraculous van 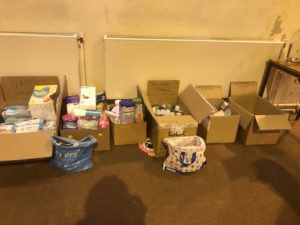 the start of the second collection

Miracles continue! At St Mary’s in Brecon the Cafe Staff had obviously worked hard all morning trying to sort out the mass of donations that were pouring in. At St Mary’s in Hay, Christina and friends were trying to do the same. 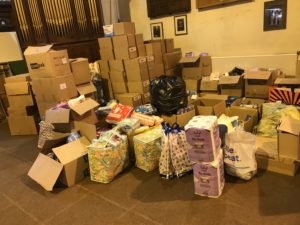 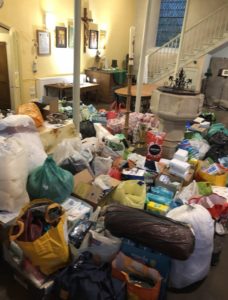 When I arrived in Brecon at 1pm the area we had left tidy was totally rammed with donations and people just kept bringing more. Susanne, Carola and Gail had offered to help and then suddenly Lis and Jeannie were there too. It was obvious that we’d not manage to get even an eighth of the donations into a car.. what to do?

I wandered off to buy some more labels and pens and saw a friend crossing the road. She enquired why I was looking concerned and I told her that we needed to find a man with a van. Long story short, she rang her son who happens to be a manager at the multi Award winning  Old Railway Garden Centre and at 3.30 he turned up with a massive van and proceeded to load all the boxes that the team had managed to label into the van. 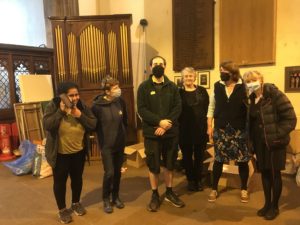 Some of the packing team with Joe after the van was loaded and the cafe waiting to close. 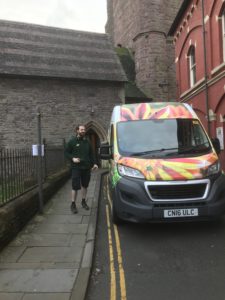 Joe with the van ready to leave 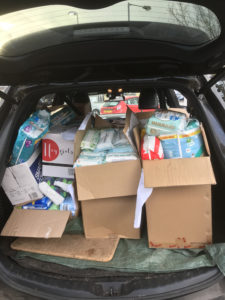 It was lovely to visit NMCC church and meet so many charming, kind and cheerful  spirits who were remarkably calm about yet more goods arriving when they had just unloaded another van and had several others queueing up to drop off. They formed a human chain and the van emptied quickly, although Joe was still very late home after a long day of work. 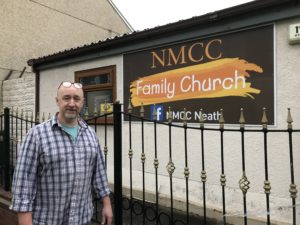 Pastor John outside his church 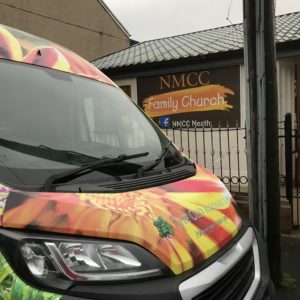 several of the volunteers recognised the name and said it was their favourite garden centre! 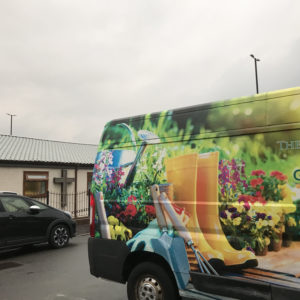 its a narrow street and a difficult place to turn. 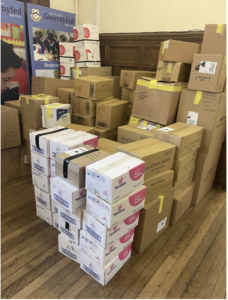 Another extraordinary day of being with amazing people!

Jasper filled his van with most of the donations from Gwernyfed school and then went to St Mary’s church in Brecon to help sort donations. Lawrence went to Hay to help pack items from Hay St Mary’s church where Christina and friends were busy. He then also picked up as much as he could from Hay school and helped by Ali S who went to Clyro School all the aid from Hay and Clyro and Gwernyfed schools came to Brecon . Again Pupils helped to load up vehicles at their schools! Christina and friends brought sorted bags and boxes from Hay. I picked up from Llangorse school and some additional donations left at our house! Meanwhile ,again aid poured in and again people came and stayed and sorted. Gail, Carola, Rowland, Sue, Allie and a number of other lovely people worked flat out for several hours so that we could have everything sorted and labelled before the large van  arrived that was loaned by Tailored Imports ,Three Cocks and driven by employee Andy.  Cradoc school called in with a delivery as did Sarah from the Cathedral with Fay Jones helping her to carry things. 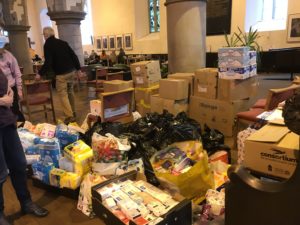 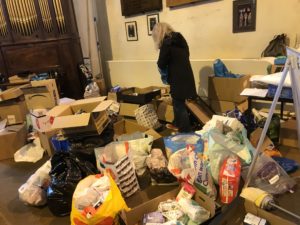 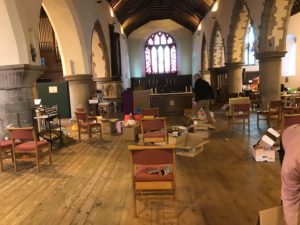 when I arrived after pick ups i thought maybe the sheer volume  of donations was reduced until i realised that there were three teams working across the church to sort, box and label! The Tower cafe staff remained incredibly tolerant and helpful!

Again so many people thanked us for doing this as it made them feel that they could help a little in what otherwise felt like a hopeless situation. So although giving money directly to a charity on the ground could help more, the actual value of  concrete demonstrations of solidarity and compassion cannot be over-estimated. And there is little more concrete than such an enormous pile of items and a constant stream of kind people. 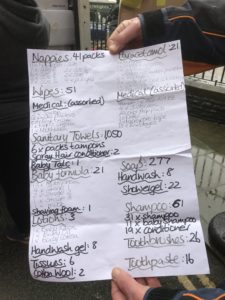 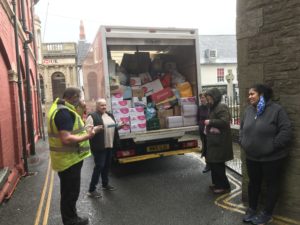 Andy chatting with supporters who were taking a short break prior to tidying the church! 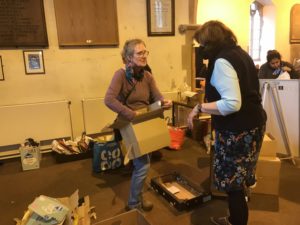 We were welcomed warmly again by the people working hard at NMCC church and our long term friend Ruth of SHARP was helping out . It was good to see her again.  The church is so full of aid that they are determined to ensure gets to where it needs to be and the plans they had for transport are being rethought. They had hoped to self drive a couple of sprinter vans but realised quickly when several sprinter vans came with aid that they would need far bigger transport. We left them pondering that dilemma but promising to see what we could do to help locate and fund.

during these three days most of our local schools have had assemblies about refugees and pupils have had a chance to show compassion. Many in our community have had spirits raised by feeling they could do something positive in the face of overwhelming negativity.  And this massive demonstration of support for people seeking refuge  may generalise to all people in need of sanctuary. It’s hard to put a price upon this for a group dedicated to helping refugees. 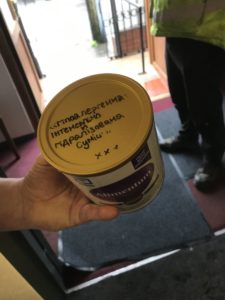 someone gave several tins of milk with writing and kisses! 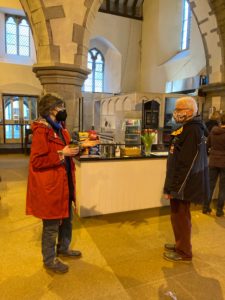 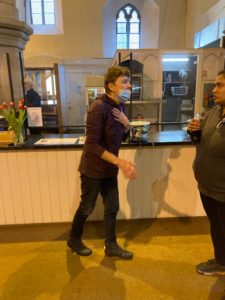 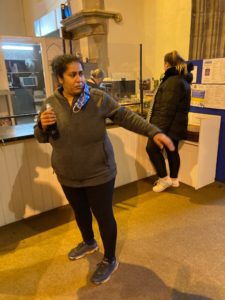 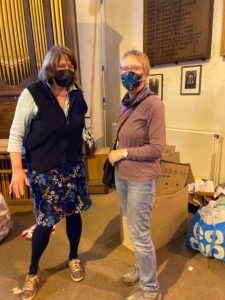 The team at relative rest and me clutching my phone and talking as per!

A day of saying thank you to many of the people and places  involved in helping with this appeal. We delivered thank you notes to Brecon and Gwernyfed High Schools, Clyro, Cradoc, Hay and Llangorse primary Schools, to the two St Mary’s Churches, to the Cathedral, to the Tower cafe, to the Garden Centre and to Tailored imports and some emails to the team of helpers including Jasper, Carola, Gail, Rowland, Christina, Sue, Ali S and Allie E and a letter to the Brecon and Radnor Express to thank the local  population.

Dear Editor
Thanks so very much for publicising the appeal we [HBTSR] ran last week for direct aid for  Ukrainian people seeking refuge from war.
Please may we also thank the people of Breconshire who gave so extraordinarily generously. There are more efficient ways of delivering aid to the Polish Ukrainian border- two clicks of a mouse will send money to one or more of the superb charities such as UNHCR or The Red Cross helping in these countries- but that could not have given half the satisfaction of  thinking about, buying, handling and giving items knowing that these things will directly help someone on the borders of a war torn country and let them know that they are not forgotten. Indeed sending items , even much needed ones such as first aid kits, nappies and wipes, is expensive, time-consuming and complex but the attention it attracts and the collective outpouring of compassion cannot go unnoticed or be bettered..
We know that schools in our area had conversations with students about seeking refuge and the importance of kindness to strangers. We heard of children asking to forego treats so that they could buy some things that might help the children caught up in the war. We met older people who were so grateful to be able to feel that they could help  to send a message of support and care. ‘We didn’t think we’d see this again.’ This short lived appeal  gave us all a sense of agency in such troubled times. People came to drop off items and stayed to help pack. Businesses such as The Old Railway Garden Centre and Tailored Imports each gave us a driver and a large van so that we could take the donations to Neath where a small family church gathered all donations  together and worked out how to transport them.
Over three days we transported 3 lorry loads of donations ,a testament to the generosity  of local people. This show of compassion ,replicated in other parts of the UK, may be what has encouraged our government to agree to match fund donations to the Disasters Emergency Committee, may have given everyone insight into  how easily we could all become refugees and we can only hope that it will spill over into a softening of the ‘hostile environment’ towards people seeking asylum and lead to abandoning many clauses of the Nationality and Borders Bill.
The House of Lords voted last week against several of the most contentious clauses in the Nationality and Borders Bill and voted to include the right to work for people seeking asylum once they have been here for 6 months. Soon our MPs will have the chance to accept the advice from the Lords…we hope they will show the  same compassion as their electorate.
So Diolch yn fawr iawn to everyone in this wonderful area that we are privileged to call home.
Best wishes,
Ailsa Dunn       secretary for Hay, Brecon & Talgarth Sanctuary for Refugees [ 1173570]