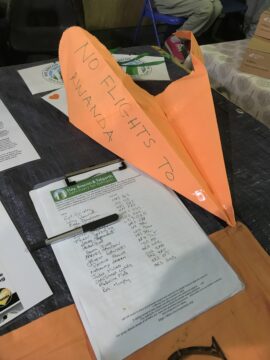 On 23rd September a group met at Y Gaer to join in the Together with Refugees coalition campaign to #FillTheSkiesWithHope. Following this we have held stalls in Hay on two occasions[ October and November]  and on 18th December we also had a stall in Brecon. We’ve used these  to highlight the work of our group, to support our local Ukrainian family who are raising money to send to Ukraine to support the  volunteers there, and to continue to raise knowledge about the Nationality and Borders Act and in particular about the proposal to send people seeking asylum to have their claims decided in Rwanda. You can read more about our campaign here and here.

On December19th, Lord Justice Lewis and Mr Justice Swift ruled that sending asylum-seekers 4,000 miles away to Rwanda did not breach the UN’s Refugee Convention or human rights laws. However the High Court overruled deportation orders against the eight asylum-seekers who brought the judicial review application finding that the Home Secretary had “not properly considered” the claimants’ circumstances, concluding, “For that reason, the decisions in those cases will be set aside and their cases will be referred back to the Home Secretary for her to consider afresh.”

The High Court was responding to the judicial review application by these 8 asylum seekers and their supporters challenging the legality of their deportation. Care4Calais, Detention Action and the Public and Commercial Services Union (whose members are charged with arranging deportation flights) brought the action in June alongside  the eight unnamed asylum seekers from Syria, Iran, Iraq, Vietnam and Albania.  You can read more here.

And the Together with Refugees update is here.

The Refugee Council in responding to the High court ruling stated

‘We are very disappointed in the outcome of this case. If the Government moves ahead with these harmful plans, it would damage the UK’s reputation as a country that values human rights, and undermine our commitment to provide safety to those fleeing conflict and oppression, as enshrined in the 1951 Refugee Convention….

“It is a hugely expensive policy that is unlikely to reach the scale claimed by the Government. The Home Office’s own evidence shows that deterrence measures such as this simply don’t work – they just force people to take ever more dangerous journeys. It also poses serious safeguarding risks, particularly for children and vulnerable individuals.

“Instead of outsourcing our international commitment to provide safe haven to those fleeing for their lives – including people from Ukraine and Afghanistan – we should be focusing on operating an orderly, humane and fair asylum system, and developing safe routes such as humanitarian visas.” 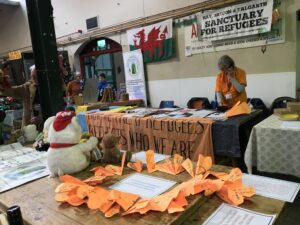 In our discussions with people visiting the stalls we have found no support for the policy and many were surprised to hear about it.

These photos are from our stall in Brecon and show the sanctuary toys[ soft toys in need of new homes asking for kindness and care ] the planes and the petition. 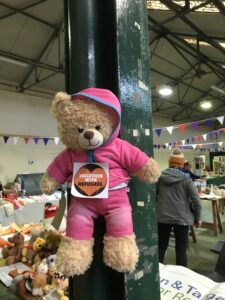 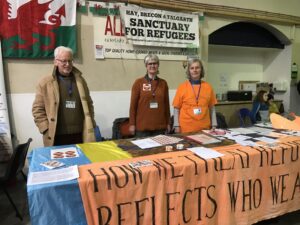 Ailsa and Lawrence met with Fay Jones on December 24th to hand over the petitions  signed by 52 people and a letter together with a box of planes.

Paper planes were made and flown by supporters of Hay Brecon and Talgarth Sanctuary for Refugees at Hay Market on 20th October and 26th November and 18th December in Brecon to #FilltheSkieswithHope and call for an end to the Government’s scheme to send refugees to Rwanda, or countries like it .

As our MP, we ask you to ensure our message of opposition and our call for a more compassionate approach to people forced to flee wars, persecution or violence reaches the Prime Minister, and that you represent our views, the view of your constituents, in Parliament. Please note that offering safe routes for people with family links in the UK would reduce the risk of channel deaths and allowing people seeking asylum to work legally whilst they await the asylum process would help with labour shortages.

Ailsa Dunn for HBTSR
We the undersigned 52 people want you to represent our views about the idea of sending people seeking asylum to Rwanda. We are appalled by the idea that we outsource this responsibility. Seeking Asylum is a Human Right and our country should show compassion and kindness to people forced to flee their homes. 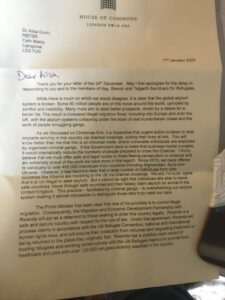 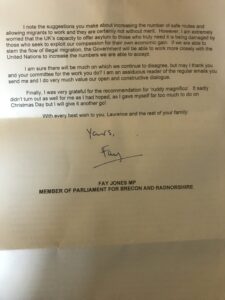