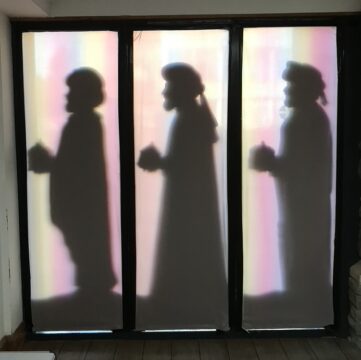 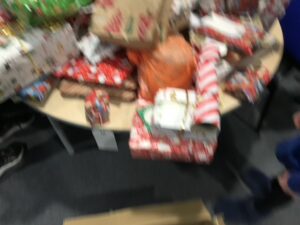 so many gifts in Hay school 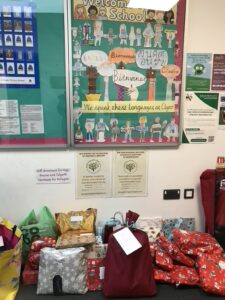 a beautiful pile of gifts in Clyro school 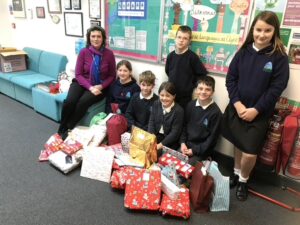 Headteacher and some pupils in Clyro School

Clyro, Hay, Llangorse and Llangynidr school pupils, families and staff gave over 180 children’s Christmas gifts that were taken down to Swansea on 14 and 15th December by Val and Tim and Lawrence and Ailsa. The gifts will be distributed by Unity in Diversity and Swansea Asylum Seeker’s Support Groups before Christmas. In addition HBTSR were able to donate some money thanks to our generous supporters so that additional gifts or vouchers  could be given to all people as well as helping with seasonal celebrations in both Swansea and Newport.. As in previous years, we were astonished by the generosity of local people especially at a time  of financial recession. 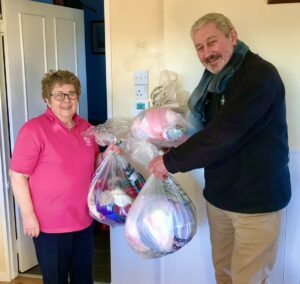 Mary handing over the hats to Lawrence

The county chairman of the Powys-Brecknock Federation of Women’s Institutes issued a challenge to her  members to try to knit over 100 bobble hats in recognition of 100 years of their existence. They easily exceeded this target and she was able to give over 70 hats to HBTSR for distribution in Swansea. There were some beautiful colours  and will be much appreciated. 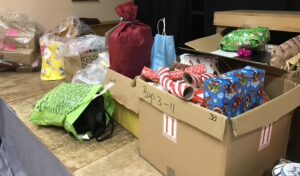 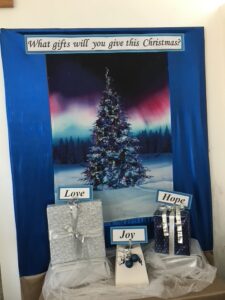 Seen in the Uniting Church in Swansea – the real gifts needed at any time of Love, Hope, Joy and Peace.

Thanks from Sandra Morton Chair of Trustees of SASS

The great present packing and distribution is done.

Roughly 240 children and teenagers from 96 families plus another 75 single adults received Christmas presents and chocolate from SASS in the past few days.  We worked with Unity in Diversity (UiD) this year.  They have delivered a similar number of presents to other asylum seekers and refugees in Swansea so altogether about 500 children and 150 adults received gifts.
Over the past few weeks and particularly since Friday, I have been pondering how to thank all of you adequately for your help, your kindness, your generosity that has enabled this massive effort and success.  I have failed to find words to express our gratitude.  All I can say is that we could not have done it without all of you and SASS is full of appreciation for your care and hard work in enabling this success.
If you delivered some of the presents, you will have seen the smiles of joy and happiness on the faces of the children and parents who opened the door.  They often express surprise that these gifts are for them.  Then they say thank you, often over and over, in English or their mother tongue and take in the presents.
One parent reported that her daughters were so happy and excited, they were jumping and dancing and there was no way that they could wait until Christmas to open the presents.
A volunteer present at the Friday drop-in sent this message:     “As I was standing near the welcome desk before leaving, I felt a touch on my arm by “girl” (aged about 7 yrs) who was looking up at us with shining eyes . She and her younger sister were managing to carry out a rocking horse and a toy vacuum cleaner. The joy and excitement on their faces will be with me for a while, as I think of how much SASS. . .  has given to  them and so many others.”
I have attached a couple of photos from Friday.
Diolch yn fawr.  Thank you so much.
Happy Christmas.
From Adella of UID

All the gifts we received were so caringly wrapped and some of the messages that had been written were lovely.

Thank you to you all for all the support you have given UiD through the year. It is very much appreciated and really gives us a boost.
Christmas Blessings
Adella