2 days of Action against the Nationality and Borders Bill 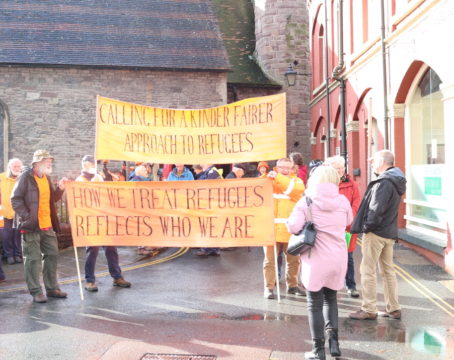 We did it! Despite rain and wind, over 70 people turned up  on the 20th October and we were able to circle St Mary’s Church in Brecon to show our opposition to the Nationality and Borders Bill. We were supported by a number of county councillors, Jane Dodds MS, several local clergy,  and a friendly police presence.
The orange heart – a symbol of hope was much in evidence. We left bunting to show we’d been and some information for anyone who wanted to know more. We had many good conversations with people about our concerns and it was so good to know we live in such a hospitable place where people are kind and welcoming.
Besides the hearts,  banners and bunting which were a collaborative effort between Virginia , Ailsa, Allie and Paul, some super stick on hearts were given out by Gaynor .. and Rev Anna gave many people lovely paper hearts. Large plastic hearts made by Tina and Jonnie were shared around, some people brought orange flowers [ Marigolds and Nasturtiums] and in general it felt rather like a carnival . Adil’s orange T shirts, hand designed by him, added to the  festival vibe. Everyone seemed in high spirits and the cars driving by hooting and putting thumbs up was an extra bonus. We were aided in the attempt to circle the church by Andy the local policeman encouraging people to move further apart and surround the church.
Thanks to all who came. The photos show people gathering before and during  the attempt to form a ‘Circle of Love’ around the centre of Brecon. For details of our concerns please see previous posts.
#TogetherWithRefugees 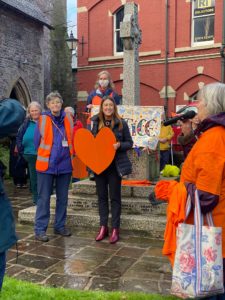 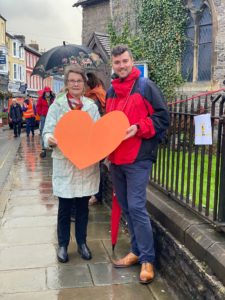 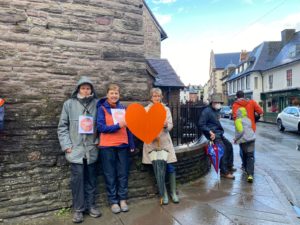 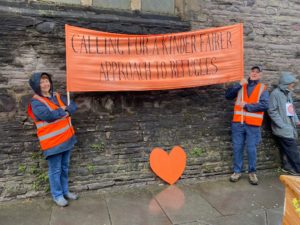 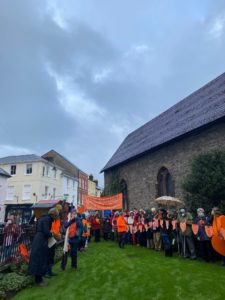 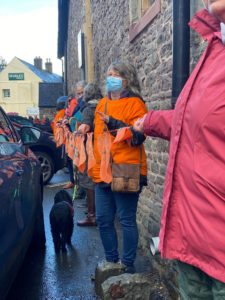 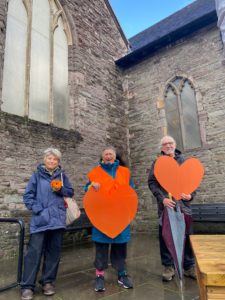 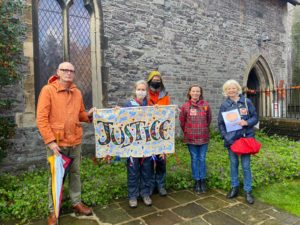 We heard the great news that Gail In the Comfort Kitchen had raised another £800 for the Afghan women’s rights charity that another supporter Ceri Hayes has been involved with for 15 years.  This adds to Gail’s previous £1500 for the same charity. And we also benefited from Gail’s photography skills seen above.
Meanwhile Michael produced a video record [which you can see by clicking the link] of the start of the gathering and our chair Margaret’s talk .
poem by Gail Sequeira 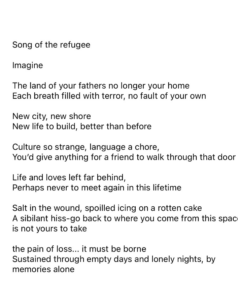 And onto the 21st October.
We had a stall in Hay Market from which we encouraged people to sign our petition and accepted with gratitude some money [£204.84!] . We were given some lovely felt hearts by Ad and gave out a number of Gaynor’s stick on hearts. These looked very effective as people walked around the market with a lovely flash of orange on their coats.   There were many lovely conversations as people showed their concern and interest.  Thanks to Claire, Virginia, Jeremy, Lis, Janet, Mark,Jane, Penny, Michael, William, Val, Ailsa and Hilary for their hard work And thanks to Emily and John for allowing us to be there.
We gathered up generous donations of toiletries from St Mary’s Churches in Brecon and Hay for People in Motion, a small charity who plan to get supplies to Afghan people currently staying in hotels . These  were delivered to Maddy by Claire after a full day organising the stall.
Adil collected and delivered a pile of aid for Care4Calais to Abeer in Cardiff.
And most of us are promising ourselves a rest for a day or so… 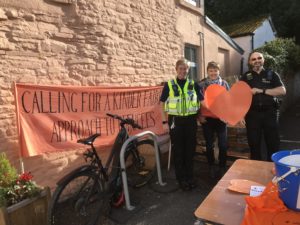 Thanks to the police for their kind support on both days. Community policing at its best. 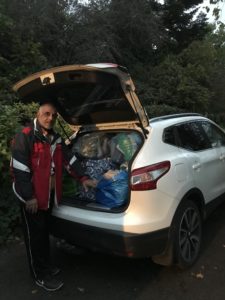 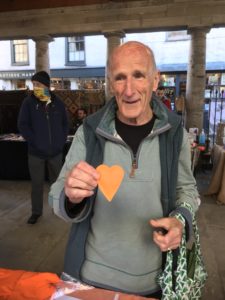 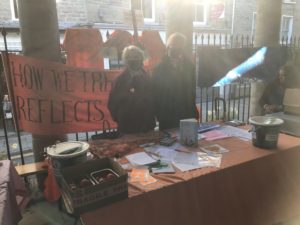 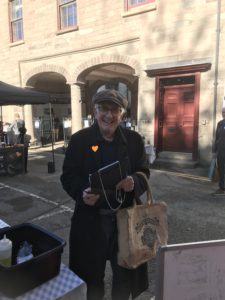 Some final comments
Adil , who was a refugee from Malawi in 1973 , commented that the turnout for the 2 days was a demonstration of how he wants people to know the UK. ‘Warmhearted, compassionate and friendly people who care about other people in their time of need”. Adil recalled his own welcome that gave him the opportunity to study and work as a microbiologist in industry and participate in vaccine research.
Dr Ailsa Dunn, Secretary to HBTSR, said  ‘We were all united by the powerful conviction; how we treat refugees is about who we are. As a further example of how much local people want to help people seeking sanctuary,  within the last week 30 bags of toiletries have been donated to HBTSR  for people fleeing Afghanistan who are currently staying in hotels with limited facilities. and a large amount of aid for Care4Calais’
The Reverend Margaret Blake said “It was heart-warming to see how many people cared
enough to come out on a really wet morning to show their support. It was really good
to have amongst us Jane Dodds, MS, and several Powys County Councillors: Matthew
Dorrance, Liz Rijnenberg, Jackie Charlton and William Powell. Together we call on the UK
government to heed our voice – and those of people like us around the British Isles –
and jettison the Nationality and Borders Bill in its present state.”
Thanks to everyone who made these two days so special. Thanks  also to Gail and Michael for photographs.
Read here for our main areas of concern and what we think would make a fairer more effective and humane asylum system.