Letter to Welsh Lords about the Nationality and Borders bill 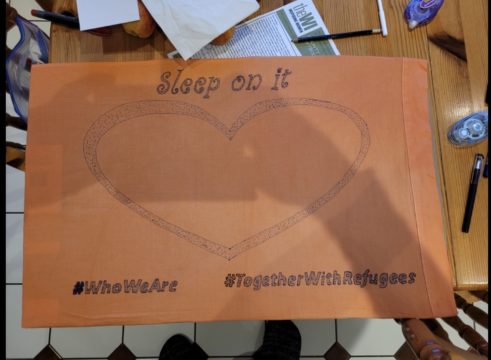 Letter to some Welsh Lords and Ladies about the nationality and Borders bill
Please forgive this rather informal approach but we are hoping  as a Welsh peer that you will forgive fellow Welsh citizens for troubling you and help us to uphold the concept of Wales as a Nation of Sanctuary.
I am the Secretary of Hay ,Brecon and Talgarth Sanctuary for Refugees, a volunteer run charity founded in 2015 to help to welcome and support people seeking asylum or refuge in South Wales. Our area has almost no people seeking sanctuary living within it but we do have a lot of welcoming kind folk who help us to reach out to areas in South Wales that house many people seeking asylum and to help in a variety of ways. In the interests of  brevity , our activities can be seen on our website; address below.
We have very grave concerns about the Nationality and Borders Bill which will start the Committee stage in the House of Lords later this week. We are aware that the House of Lords tabled a number of amendments and we write in the hope that you might be able to support  two key cross-party House of Lords amendments.
● The removal of Clause 11 which would permit the Home Office to treat
refugees differently based on how they arrived here; and
● The introduction of a new and safe route by setting an ambitious but
deliverable target to resettle 10,000 of the world’s most vulnerable refugees each
year.
If passed into law, the Nationality and Borders Bill will deny many refugees the chance to seek sanctuary in the UK, criminalise many of those who do try, isolate refugees in harmful out-of-town institutions, and undermine 70 years of international co-operation under the UN refugee convention.
As well as being inhumane,we and many others believe it will be expensive,unworkable and erode our international standing.
The government says the Bill will ‘fix the broken asylum system’. Instead we fear that it will worsen problems such as the large, growing backlog of people awaiting a decision on being accepted as a refugee, and the poverty and insecurity they suffer in the meantime.
To make matters even worse, the Bill does nothing to increase access to “official” routes nor to offer safe passage for unaccompanied children or others with family ties in the UK.   It does not address the right to work whilst awaiting decisions upon asylum cases which can take years and may lead to exploitation such as modern day slavery. Allowing people seeking asylum  to work would save the country upwards of £100 million as well as helping them to integrate, improve mental wellbeing and self worth.
We believe that how we treat people seeking refuge reflects who we are. At our best, we are welcoming and kind to those facing difficult times. If any one of us feared for our lives or the lives of our loved ones, we’d hope that others would help us to safety.
Please do what you can to improve this Bill for a kinder, more humane approach to people seeking sanctuary – so they can find safety in the UK, rebuild their lives and make a valuable contribution to their new communities.
==================================
REPLIES

Thank you for this moving email Ailsa. As Talgarth locals we are very aware of the great work you do and we look forward to contributing more to your work if and when we are able to live full time in Wales.

However after a lifetime in politics i am also aware that public opinion is against anything that looks like an open doors policy. Its no good  being right if we don’t win elections and so get the chance to change things. My party Labour will do its best to find a way through on this and i shall vote as the experts on our frontbench advise.

Thanks for your email and the work that your group is doing.

Naturally, I support your objectives, particularly at a time when so many civil rights ,including those of refugees, are in peril in our country.

I regret to say, however, that I’m unlikely to be able to take an active part in Lords’s proceedings for some time to come.[ Sensitive data redacted] ….. my attendance in Parliament is extremely limited. I’m sure you will understand the constraintse

I am sure that my Labour colleagues will put strong emphasis on sustaining civilised standards in their consideration of the Bill.

Thank you for your email.

I will consider your points carefully as I listen to the debates and possibly speak in them. This is a very complex issues and there are some serious national security concerns that will have to be addressed.

I suspect that your 10,000 figure is a considerable underestimate even on a yearly basis, and even the natural and welcome hospitality of Wales may be stretched unless these issues are addressed by the international community.

Many thanks for your e-mail relating to the Nationality and Borders Bill. I salute your work in projecting Wales as a Nation of Sanctuary and working to attain those objectives.

I have been unable to participate in discussion on legislation during January after proving positive with Covid a few weeks ago. I am now slowly working my way back into the fray.

As you may know, votes on amendments are not taken in the House of Lords at Committee Stage but rather at Report Stage which follows. I assume that the amendments to which you refer will be discussed in principle shortly but will be re-tabled – possibly with fine-tuning arising out of the Committee Stage debate – and will be pressed to a vote, if necessary,  at that stage. I shall do my best to be there at that crucial juncture, to support the changes you mention. If you would care to let me know which of my colleagues is working most closely with you on these matters, I shall do my best to keep in touch with him/her on the likely timetable for such votes.

Thank you again and best wishes for the success of your work.

Thank you for contacting meI don’t feel able to lead on an amendment as I haven’t had an involvement in the  Bill to date.But I would support an amendment laid by another Peer, so please keep me in mind and let me know who will lead on this. Also, it would be helpful to have ‘chapter and verse’ form Welsh Government over exactly their wishes re amending the Bill. Many thanks again,This is important  With best wishes,Ilora