Kite flying in Hay to show Afghan people that they are not forgotten. 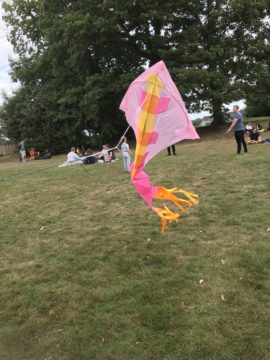 Rachel decided to join in with the Good Chance Theatre kite making and flying day to mark a year since the Taliban took over in Afghanistan. It seemed a great way to help promote our Afghan friend Sweeta’s need for family reunion and to highlight  the need to remember all people forced to flee from their homes. Initially Rachel approached Hay Castle to see if they would allow us to use their facilities and space and we were delighted that they not only said yes but were very welcoming. 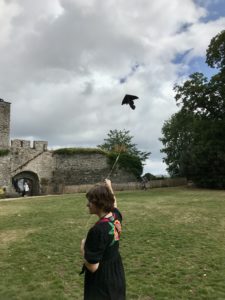 Here’s one I made earlier 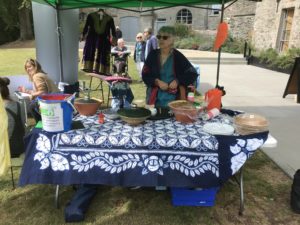 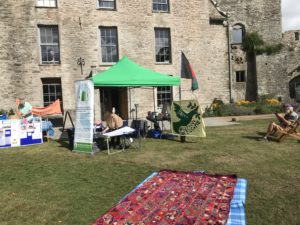 Rachel recruited a great team of people to help her! Sandra and Liz helped her to show children how to make the kites, Sarah and Selina did Afghan inspired face and arm painting, Dan was a dramatic and captivating story teller and Pauline, Nansi and Lynne served the delicious Afghan food made by Rachel, Pauline, Ceri and Gail. Sean was on kite flying and  general motivation. Ailsa, Lawrence, Claire, Lynne, Philip , Margaret, Pat ,Lis, Stuart  and Neil talked about the group and encouraged people to sign our petitions at various times throughout the day. 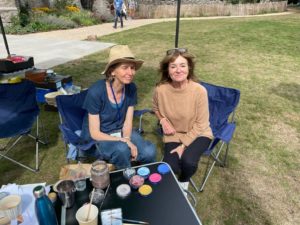 Photos show the face painters, the story teller in action, and the kite making in progress.

During the day, over 40 kites were made and flown, all food was eaten and over £300 was raised to help the Afghan midwives. We were delighted to have a visit from Sweeta and Ali and also from Abergavenny Town of Sanctuary with several Afghan families. 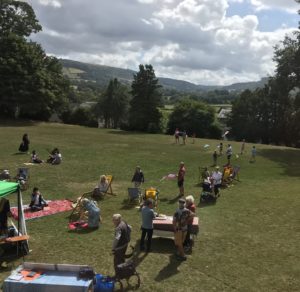 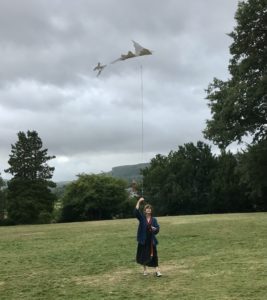 photos show the kites being flown and some beautiful arm paintings 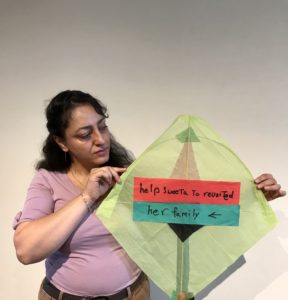 Sweeta made a kite. She still waits to hear if her children will be given visas to join her.

How you can help Afghanistan.
a   Please see our campaign to help Sweeta be reunited with her family. Sweeta is an Afghani lady who was forced to seek asylum in Swansea 4 years ago and has since been trying to rescue her 2 children and her mothers and sisters. Details here   PLEASE SIGN and SHARE…

b You can support Afghani people by signing the pledge against the #AntiRefugeeLaws.

c You can support  a petition of the Joint Council for the Welfare of Immigrants JCWI to help climate activists in Afghanistan obtain visas. ‘Climate justice is migrant justice’.

c You can also donate to Afghanaid  who are supporting Afghan women to feed their families, earn an income and rebuild their lives

or to Amna [ who provide psychosocial support here and across the world] or the bigger charities such as Unicef, International Rescue, Red Cross to name a few..

Finally on the Afghan front, Rachel Giaccone went to the Home Office and UNHCR in support of Afghan Midwives on Monday 15th August. She and the Association of Radical Midwives (www.midwifery.org.uk) are  supporting  Afghan midwives who are  seeking to resettle in the UK.  She was pleased that a Home office official suggested that the Midwives visas might be prioritised…Midwives in Afghanistan are advocates for women’s rights and sexual health. They have been targeted over recent years and it’s now almost impossible for them to work so some have left and are waiting for visas to come to the UK. There is a fundraising page here.

Rachel writes #Flywithme @Hay Castle with #hbtsr (@ Hay Brecon Talgarth Sanctuary for Refugees)
We made over 45 kites out of tissue paper and bamboo,ate a tasty Afghan Flavor picnic on the lawn , the children had henna style tattoos painstakingly painted on hands,face and feet and they could sit on a beautiful Marsh Arab Rug and hear Tales from Central Asia.
The weather was perfect , sunny and windy , the kids easily flew their kites.
We were delighted to welcome 4 Afghan families to our day .The public readily signed our petition for Sweeta Durrani urging the home office to unify her children after 4 years of waiting .If you wish to sign please do and share with as many as possible …. 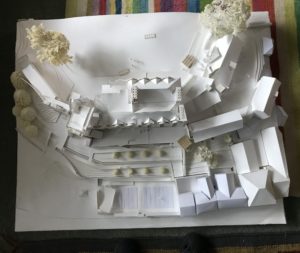 This intricate scale model of the castle was seen in a pile of rubbish.