Two Days in Caerphilly with The Lumen Prize

I had no idea that digital art could be quite so fascinating and accessible. We’ve had 2 very successful days at Caerphilly Castle thanks to sponsorship from The Lumen Prize for digital arts, the Arts Council, CADW and City of Sanctuary (via the Guardian fund). We were able to enable about 115 people who are seeking asylum and refuge in the 3 cities in south Wales to see this magnificent exhibition and to explore the biggest castle in Wales. Thanks to Carla Rappaport, the director of the Lumen Prize, for her inspiration and generosity and to our supporters Margaret, Melrose, Steve, Trevor, Lawrence, Philip, Lynne, Katy and Stanley for help on the days. Normally admission to the castle is £6 a head so it was great to be able to do this for free.

I think that no one was quite sure what to expect but the offer of a day out was welcome. Everyone went home knowing that digital art is fun  and that the biggest castle in Wales is impressive but cold!

On Thursday 24th we met with a minibus driven by Richard Eynon from Cardiff Oasis with about 15 people on board and a Bluebird coachload of 53 (+babies) with Dylan Moore and George from Sanctuary Newport.  Introductions and the plan for the day in English, Arabic, Farsi and Amharic were fascinating as by the time we got to Amharic we seemed to only need about two words! Our group provided hot drinks throughout the day, thanks to our mug collection and Water heater and various donations of cake, biscuits and fruit added to the sandwiches paid for by the Arts Council to ensure no one went hungry.

We’re becoming very good at setting up feeding facilities in differing settings but this was almost purpose made. The kitchen just off the Great Hall is state of the art and was a good water supply for drinks and washing up. The entrance hall and teaching area with upstairs toilets gave us a warmer space to be in and easy access for washing pre-lunch.

George the Newport English Teacher says he always has the biggest cup of tea – we didn’t let him down!

I was privileged  to wander round the castle with 2 young men from Cameroon and Eritrea and its amazing how little English or even a common language you need when you are having fun and you use the arrow slits for their intended purpose in play. The Trebuchet particularly  impressed. A young man from Egypt asked about why the castle was in the countryside as the only one he knew from home was by the sea. We explained that this was built by a French/English man called Red Gilbert to keep the Welsh away from the south.

Watching people interacting with the art was another privilege. Carla and I were particularly impressed by a young boy who sang in Arabic into the microphone that changed the song into soundwaves on a projected clock. He enjoyed this experience so much and so did we. Everyone seemed amazed by the 3D landscape and interactive exhibits.

The opportunity to explore Caerphilly was seized before the trek around the moat to the buses. Richard thought he might be 2 people short on leaving the castle and teased us by saying that was a small enough number not to matter!

Playing at repelling the enemy!

And so to Sunday 27th with a 53 seater coach full from Swansea led by Wayne, Tah and Lazlo.  I’m told that it was the best trip so far mainly as I was away! Again, great enthusiasm for the art and the castle with unexpected benefits when a local lady called by to find out about us and City of Sanctuary. Her son works for a charity helping with education abroad for people seeking refuge and she was unaware of any local groups helping people seeking refuge. We were able to enlighten her.

I’m told of watching a Syrian boy, bouncing with anticipation for his father to get the virtual reality head-set to work, he and his brother were so excited, the whole family cheered when he finally got it to work. And you could always tell when someone had it working, for as soon as they looked down they tended to snatch off the headset – you see that you are standing on top of the tallest building and one step away you’ll fall…

Feedback from the group suggests that everyone had a fantastic time.  It was difficult to discern what was enjoyed the most, the  wonderful Lumen Prize digital art exhibition or exploring the amazing Caerphilly Castle. The exhibition was great, especially as it was  hands-on and people were encouraged to interact with the exhibits. People eagerly queued to try the virtual reality headsets and to touch and play everything. Wayne sat down outside at one point and marvelled at all our friends exploring the whole castle with heads popping up over battlements and turrets, folks running in and out of numerous doors and up and down towers at different levels and calling to each other excitedly through arrow-loops. He wish he’d set-up a tripod and made a time-lapse recording. It was a real joy to see.

Singing to the clock

Many people commented on how amazing the castle was and how it looked so original, like it would have done when it was built and used.

A was noticeably taken aback by it all – she clearly has a love of historical places and this was a real treat for her.

R, our expert in computer sciences, stood transfixed by an exhibit that had an animated 3D-mapped display projected on to some driftwood, he’d taken time to watch and understand it and kept crying out “can you see the subtle details” to which we replied “oh yes!” after squinting and concentrating for quite some time.

The children loved playing with the exhibits but the highlight of their day was undeniably playing hide and seek in such an amazing setting with lots of really cool places to hide.

Yet again the enthusiasm that the whole trips were treated with was uplifting and if anyone ever asks why spend money to take people out we just need to point out the benefits of feeling wanted and cared for and the even bigger benefits to us and the locality from meeting them and rediscovering ‘joie de vivre.’ 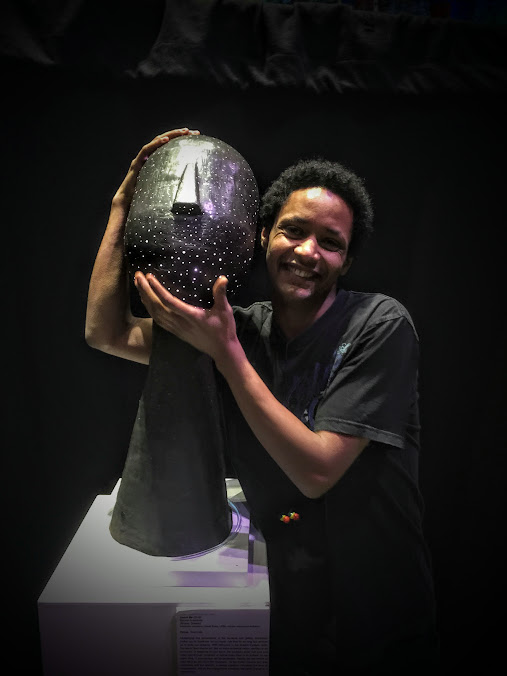 Many Thanks for all things you have done for me. Please give my LOVE and REGARDS to EVERYONE – Ali

Thanks to everyone who made our trip possible. It was so good not having to make any of the arrangements! Newport Sanctuary

Thanks to Lumen Prize and CADW! It was great for a few of our English class to have a day out doing something so unusual but also so normal. Lots to talk about in class. Cardiff Oasis.

Many thanks once again to all involved for the fantastic opportunity to enjoy our beautiful region and to be warmly welcomed and valued. Thanks to the Lumen Prize and its director Carla for her realisation that this exhibition would be so appealing to people of all ages and races, Also to CADW and the Arts Council for helping to make it possible. Wayne, Unity in Diversity Swansea.

Thanks again to Bluebird and Stuart

A big thank you to everyone that made the day possible, including: