A Picnic in the National Park

View from the Pavilion

Well, what would Adelina Patti have made of it? -A famous opera soprano, whom Verdi described as ‘a stupendous artist’. She was a seriously rich woman who bought Craig-y-Nos Castle in the Tawe Valley and, in 1900 or so, paid $2000 just for a billiard table to install there, not to mention constructing her own private theatre, modelled on Wagner’s festival theatre at Bayreuth.

We’ll never know, of course, but at least Craig-Y-Nos rang today with a different music: the sound of laughter and animated conversation, much in Arabic, from a group of 70 or so people seeking sanctuary and their friends enjoying a day out in peace and warming sunshine. Based in a beautiful circular meadow, beside the clear waters of the Tawe, the group picnicked, painted, modelled clay, played football and chatted, in front of Patti’s ‘pavilion’, where she and her guests changed for croquet. It was a magical day, hosted by staff and volunteers of Brecon Beacons National Park (Thanks Fran, Mischa, Jackie and Geraint) who took us on a gentle ramble across the streams, beside the fishing lake, through Patti’s famous rhododendron tunnel and on to feed the ducks. Jackie’s supervision of Pat, Robert, Reg and Lawrence’s shelter erection was described by one experienced ‘Erector’ as superb.

For the newly arrived Syrian families, now settled in Ystradgynlais, this was a first opportunity to get together with members of the much larger refugee community in Swansea, which includes families from Sudan, Eritrea, Ethiopia,Cameroon, Pakistan, Russia, Afghanistan, Iraq, Iran and many other countries. Swansea has a number of support organisations, including Unity in Diversity and Swansea Bay Asylum Seekers support Group, who are able to help and advise all new arrivals. Without the help and support of Wayne and Maria and other Swansea based volunteers there would not be any away days as they find people who would like to come, replace them if they have to drop out, check upon their needs, support them to arrive at the coach if necessary and travel with them. Since December, 29 families (103 people) and an additional 124 individuals making 227 in total have been on a trip from Swansea to Breconshire.

There was plenty to do: football for the younger and fitter; the walk in the woods; modelling, Deluxe face painting and sketching, thanks to Rhian (Goodhand Glass) and Pontardawe artists and musicians but above all the chance to relax, stroll and chatter in peaceful and safe surroundings.

A group of walkers passed through, curious to know what was happening. They were welcomed and plied with tea and biscuits, curious about the large group of people and genuinely pleased to see everyone sharing enjoyment of the countryside that they themselves value and promote.

HBTSR’s now traditional welcome (a wonderful spread of biscuits, welsh cakes, brownies, tea and coffee) greeted the refugee group as their coach arrived from Swansea. Lunch, with vats of salad, hummus and fruit (Thanks to Melrose, Robert, Virginia, Penny, Mike, Barbara, Reg, Margaret, Patrick, Maggie, Jonnie, Tina, Sean, Ailsa and Lawrence and also to the washing up and tea making ‘fairies’ who ensured the all day food and drink was available!) was supplemented with massive quantities of food donated by local stores Morrisons and Aldi (especial thanks to Virginia for coordinating this with Lawrence, Penny and Andrew).

At the end of the day everyone went home with a goody-bag including eggs, salad, vegetables and bread expertly packed by S and S. A special gift of delicious muffins for our young coeliac sufferer was given by ‘Love at First Bake’, a Brecon based bakery specialising in gluten free cakes. He was delighted as we have been known to forget cake for him.

Again Bluebird Coaches did us proud by coping with delays and additional journeys to Ystradgynlais. Thanks John for your expertise!

Yet for all the wonderful food and activity, the most important things were the welcome, the relaxation, the beautiful surroundings and the good company of others seeking refuge from a score of different countries and conflicts. Amid such peace, as red kites soared overhead, conflict and loss were for a few hours made more distant as we all shared fellowship, food and fun.

“Thanks for such a lovely day that I will remember for ever.”

“When I feel sad, I remember the days out and it makes me smile.”

“Its nice to feel human.”

“Its hard to imagine what they must have been through and the least we can do is share our own good fortune.”

“I’m so happy that you were able to include the Ystrad families in today’s outing – they were so animated on the way home – obviously really enjoyed it and thanked me so many times – rather misplaced gratitude towards me.”

“Great job today folks, thank you so much xx”

“I don’t really know where to begin… I spent yesterday evening thinking about how I could adequately describe our visit yesterday in words.. I am not brave enough to begin to name all the people who played a part in making yesterday the success it was. Apart from ALL at HBTSR and the lovely staff from Brecon Beacons national park, the Wonderful Mr W and UID volunteers, the dog owners, musicians, art and crafts people, S the translator, special thank you must go to the food/ cake makers who never fail to provide a banquet.

Our lovely friends who have endured so much in their relatively short lives, and struggle daily with serious challenges, could not help but feel loved and wanted within the grounds of Craig y nos yesterday. The sunshine was an added bonus, as was the addition of the newly arrived Syrians from Ystrad, who must have felt delighted to be included and talk with ‘ Swansea Syrians’.

The feedback is always heartening – you do the hard work, we get the majority of the feedback on the way home, so it is important to convey this to you all. We interact with our friends on a weekly/twice weekly basis. We see the difference that these trips make to them. They feel included and wanted and special. They seriously sometimes gasp on the way home when looking in their ‘goody bags’. I hear the heartfelt phrases ‘ I feel very happy today’ ‘ I feel lucky to be here’ ‘ such kind people’ ‘ wonderful countryside’ ‘ amazing day’ . These trips are something to look forward to and perhaps relate to their families thousands of miles away in a phone call.

I see in these relaxed, safe situations, how some of the personalities are developing and tensions relax. One man who arrived in Swansea a few days before the trip to Hay last year, looked like a different person almost a year later. He still misses his family and waits for his ‘paper’ but it was after a few of these trips that he began to smile, and now he laughs occasionally too. In my rambling way I am trying to say: thanks a lot to one and all and never underestimate the impact of all you do.” 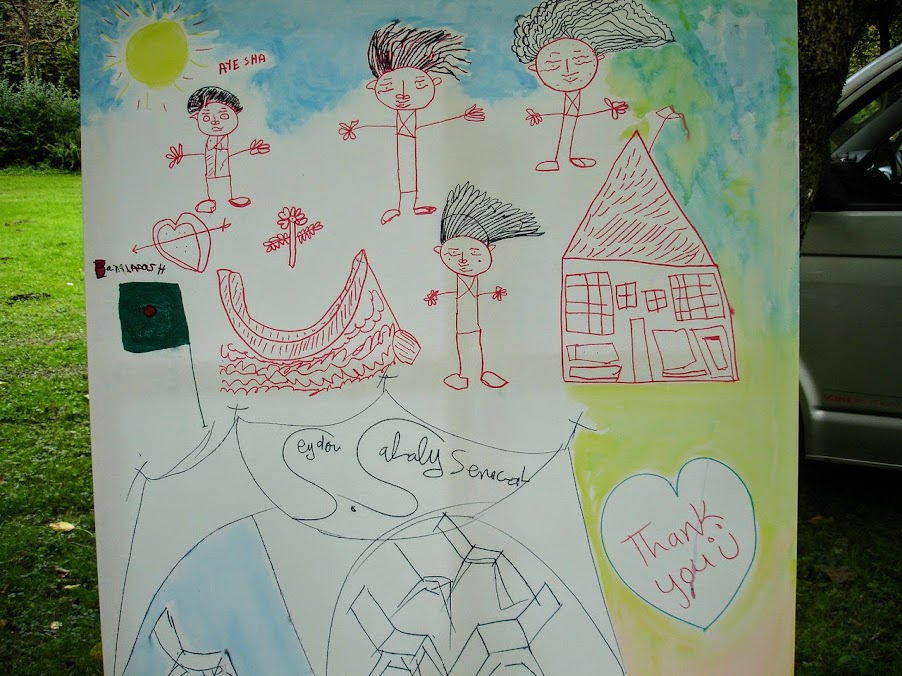 Ailsa also adds her thanks for the superb teamwork and good humour that made this day not just possible but so enjoyable. Diolch yn fawr iawn.